About a month ago, my friend Steven Hartsock, who owns Socks’ Love Barbecue surprised me with the news that according to Yelp, Socks’ Love Barbecue was rated the best BBQ in the state of Georgia! That’s pretty amazing news, but then the Atlanta Journal Constitution echoed that article with one of their own.

Yelp’s best barbecue joint in Georgia is open only three hours a day!

To say this positive press that Steven is getting surprised me wouldn’t be completely honest. I’ve seen up close how big his love for food and people is. Most importantly, I saw his love for his Creator and his Savior… and I knew that God was going to use him and his passion of BBQ to impact our community.

Let’s go back to when I first met Steven It was late 2011 when through a series of fortunate events, Howard Brothers and Steven Hartsock ended up at a small barbecue competition in Duluth, Georgia. We were showing off grills and accessories, and Steven was slinging BBQ (and specifically) his Original Socks Love Rub Seasoning. In the last few hours of the event, it was decided that Howard Brothers Duluth was going to start stocking a few bottles of seasoning (I think there really was just one flavor back then.) From that meeting, Steven and I connected a few times after. I was just starting to do more web marketing projects as a side hustle. I agreed to throw together a website which would show off Socks Love Rub, and give Steven a ‘dealer locator’ that hopefully would allow him to start reaching other independent retailers like Howards.

Over the next few years, we met multiple times at his home in Duluth or at a local coffee shop to tweak this and change that. Many times over the years, I’d receive a text, “Hey can you remind me what my password is for the wordpress admin?”

2013, Howard Brothers partnered with the ‘socks family at Man’s Corner at the Duluth Fall Festival. I don’t think Steven remembers how much we worked him in those early years. He helped us cook and his wife, Kim would be helping with samples (while she talked about the seasoning on that meat!) The next thing I remember are phone calls from Steven telling me about needing to add a new dealer to the dealer finder on the site. All of the sudden, Sprouts was selling his product. He seemed to be at more and more weekend events and festivals. He was catering… all of this while he was finding places to go pack his seasonings in a shared ‘clean’ kitchen. Through the years, we started shipping to folks who we thought might be influencers… in fact, I think it probably was before being an influencer was what we think of today. We just wanted more folks to have the OG rub. It was during this time, in 2015, I found out that 680thefan’s ‘talent’ were working a Friday before July 4… and none of the sales weasels were… seemed like a perfect time for Steven and I to go surprise them with some ‘Q. Howard Brothers was (and still is) a partner of 680 and this just seemed like a perfect opportunity for me to further the branding of Howard’s while introducing them to Steven.  Steven was crazy nervous… but crushed the opportunity to go serve food and ended up finding time on the radio to talk his passion with the Front Row. To make a long story short… here’s the secret. I’ve not hosted his website for over a year. At some point, Socks Love Rub grew up and became Socks Love Brands and ultimately Socks Love Barbecue.

He business and his Website had niche needs that I wasn’t the best to handle… and he had to move on.

It was truly my pleasure to handle things for a while, but it is extremely rewarding to see a guy I know and love as a brother succeed. As I sat there a couple fridays ago enjoying my ribs and OMG Mac and Cheese, listening in to all the customers talk about ‘this place is amazing…” and “needs to be open more hours…” and “wish there was a place like this near my house.”

I was smiling. Smiling at a small business win.

What’s the takeaway for this? Why in the world would I both admit to losing a client?

I didn’t lose him. I gained him. 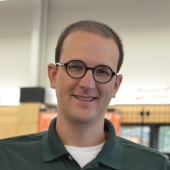